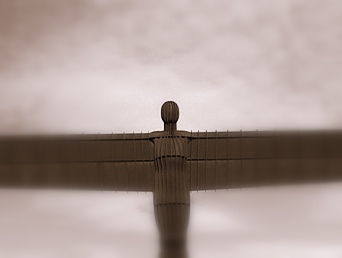 To think of Gateshead is to think of the Angel of the North, Antony Gormley’s towering copper sculpture of an angel with outstretched wings. Sited on the former colliery pithead baths, which is synonymous with the town’s mining history, there is a magical poetry to the spot the piece rests upon given that it has become such an iconic part of the region. With it’s warm copper hue lending the angel a naturalistic appearance – as if like a tree inextricably part of the landscape – it emanates timelessness beyond its relative youth. It is both a homage to the past and a beacon for the future. It is Gateshead then, now, and beyond.

The Angel, as grand as it is, is just one of many public artworks embedded across Gateshead. From the mountainous architectural landmarks of the Sage Gateshead and the Baltic Centre for Contemporary Art to the almost clandestine pieces that blend into the environment – for example Andy Goldsworthy’s Cone and Sally Matthew’s Goats – the town is decorated with some 80 plus works of art, making it one of the world’s most innovative and progressive boroughs in not only recognising the importance of public art, but in investing in it wholeheartedly. And it’s not a recent thing. Since the early eighties, Gateshead has been thinking creatively about the impact art can have on people living and working in its borders, as well as how it can contribute to the overall development of the town.

“In the early days we had a desire to bring art out of galleries and into the wider world, to make them more accessible to the public,” says Anna Pepperall, Gateshead Council’s curator of public art. “We quickly developed a philosophy of embedding public art into regeneration work and came to find that it could make an important contribution.”

As Pepperall goes onto explain, public art has a holistic quality to it, which is it improves the environment for residents and helps the economy: “It makes people proud of Gateshead, encourages inward investment, and attracts visitors. Gateshead now has a reputation for its cultural led regeneration.”

It all originated in the 1980s when the council began making environmental improvements to the Gateshead riverside area, which eventually led to a collaboration with Northern Arts to produce the first of a series of artworks. The location where these first works were installed has now become the renowned and award-winning Riverside Sculpture Park, which is one Gateshead’s top artistic hub. Also, at the time, Gateshead didn’t have its own contemporary art gallery. This was another way of bringing art to the masses.

By 1986, on the back of the success of these projects, a Public Arts Programme was established by the council, whose legacy, a quarter of a century on, is, quite visibly, obvious. There are now over 80 pieces of art sprawled across the backdrop of Gateshead as well as inventively incorporated into buildings itself. Take for example the colourful 200m curved balustrade that stems from one side of the Sage Gateshead to the other. It is a work of art. Literally. Designed by Kate Maestri, Ribbon of Colour was designed to complement the undulating form of the concert hall, and though part of the very fabric of the structure of the Sage, is itself a distinct entity. So too Richard Deacon’s Once Upon a Time, which is built onto the surviving abutment wall of the original Redheugh Bridge.

What is great about such art is its lack of pretentious flagrancy. Though some are to the untrained eye flamboyant or abstract – for example Cath Campbell and Miles Thurlow’s minimalistic No No No No No near the Tyne Bridge – they are all expertly placed to ‘fit-in’. They are site specific and often interlaced with subtle historical nods.

Pepperall explains: “Often our artworks are a celebration of the local area and sometimes they do have a specific purpose like the James Hill memorial which celebrates a 19th century fiddle player. They can even be functional such as a seat, but generally, the artworks are the artists response to the site.”

I wonder if such exciting ventures will continue in this austere climate. The spending cuts introduced by the new government, which are already having a devastating effect, will surely impact on the council’s ability to maintain its commitment to art.

“We certainly hope not,” says Pepperall. “Gateshead hopes to continue its strategy to develop public art. Indeed in this current economic climate we need to concentrate on how we can encourage investment.”

This positive attitude to public arts is significant: the council views art as an integral part of any development in the borough. 25 years of creativity has transformed the way the town sees itself, and equally, the way in which it is perceived by the outside world, and, just like the cultural resonance of the mining history, art has become an unmistakeable aspect Gateshead’s identity.

With a new work entitled Water Wheel recently unveiled in High Lanes, Heworth, and the installation of artworks currently taking place for the next stage of the Gateshead Riverside Park, the region continues to cement its position as one of the best places for public arts. Here’s to another 25 years of art, and another, and another, and another.