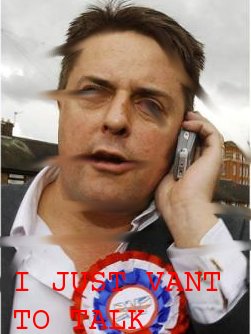 Much to the dismay of many a media commentator, the British National Party has been – or will be – invited onto the rip-roaring entertainment politics show know as Question Time.

Cue mass shock and outrage – This is a PR stunt! The BBC has no morals! We are legitimising racists! This isn’t a democracy!!!

Despite recognising the possible risks involved in this exercise of open debate, namely that of raising BNP credibility or sympathy, I’m with the BBC on their decision to play host to Nick Griffin. The bastions of English neo-fascism, who lack any tact in subverting their unashamedly extreme right-wing values, should indeed be given a platform to voice their drivel based on the simple fact that a conversation exists with or without the BNP in attendance, and that is decidedly dangerous. What usually occurs is a one-sided conversation that is often histrionic, repetitive and self-serving, and not at all open.

Where sensible discussion can take place, then give the BNP screen time and column space. As has been said many times before, when we get to the particulars of BNP policy, we often find a rickety old frame propping up the facade of sensibility, and equally, we often find illogical, destructive, and pathetic ideals at the core of their beliefs. Raising these very issues in conversation with the BNP is how we expose the hypocrisy and lunacy of what they are all about.

As for Question Time as a forum for enlightened dialogue, well, that clearly isn’t the case. With David Dimbleby’s incessant interruptions and sardonic swipes, and members of the panel turning up the volume on whatever empty point they are attempting to make, the show is a hoot and giggle for the most part, and marginally topical for the rest of it. That said, it’s enjoyable and it can be informative.

So, with that in mind, let’s put the British National Party under the microscope and critique them in a decent way. I have often seen the BNP being vilified by both audience members and fellow panelists in these very TV debates, and it is truly awful and cringeworthy. The conversation often spirals into pot shots of vitriolic outbursts that are a million miles away from the question(s) that are originally put to the table and it crumbles into a debacle. I understand that the BNP naturally irritate and offend people, and that these people become – quite rightly so – angry and annoyed, but it then clouds there there judgements when a microphone hovers over them. Their calm disposition is comprimised and the argue with feeling rather than rationality. A bit of both dictating a question is ideal, but in a short and snappy arena, it can be extremely difficult to achieve. Thus, what then occurs, in a very visual and graphic way, is the unintended victimisation of the BNP, with everyone else becoming the bad guys. It’s playing right into the hands of the BNP, fuel for them to lash out at the liberal elite bashing them in a most ungentlemanly way. And don’t they know it.

Popular parties lack character these days. There’s too much spin, too much bullshit, and too much alikeness. Fringe parties offer a peculiar mix of excitement and change. Who knows what the BNP offer, aside from a brutal vision of a dead British society. But, people have voted for them, and significantly so despite poor election turnouts and so-called protest votes or abstentions, and thus they are reflective of marginal proportions of the UK population. Their voters have a right for their party to be heard alongside everyone else.

Is this an abomination? Well, a year on from the global catastrophic economic collapse that originated in the west, we can quite rightly conclude that democracy and the leaders who govern us failed to curb the excesses of capitalism. Once again, the failure of democratic politics is opening up an opportunity for extremist parties to begin fermenting away.

And it doesn’t take a show like Question Time to help achieve that.